Although my beams are not quite done, I've been trying to also work on other prep work for attaching the floats.   Here is the jig I made for locating the beam bolt holes: 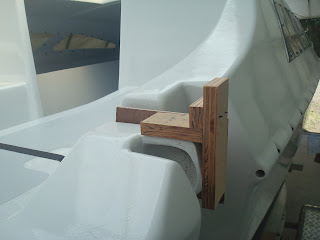 Dry-fitting a part after drilling all of the holes: 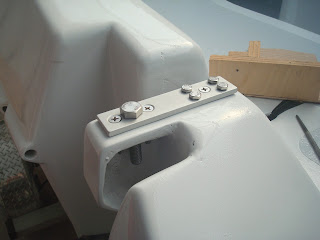 So far Fastenal has been my source for all of my 316 hardware.   McMaster has quite a bit too I think.

I tried to mount the forward beam plates today but you need three hands to hold all of the different parts in place while trying to get a nut on there.   So, I'm going to have to draft my wife into helping soon.

The spacer bushings on the lower folding strut pivot pins are a major pain.   I am not sure how tight Ian intended them to be, but the ones I have are so bloody tight that I've practically destroyed one trying to hammer it on, even after putting some light grease on the inside of the spacer.    Ordered some replacement tubing, with a wee bit more inside diameter clearance, hopefully goes easier next time.

Have to say, other builders seem to get through these phases a lot quicker than me.  Guess I am just slow but oh well :).
Posted by Jay at 10:00 PM 2 comments:

Tiller is not quite done but it's getting there.  Here I'm setting the final posture of the last piece: 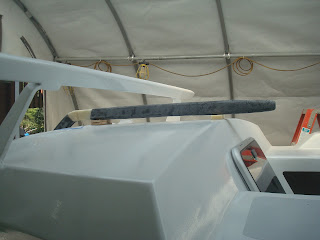 The plans don't say how far into the cockpit the tiller should go.    I decided to go with the above after looking at pictures of other boats, and also after thinking (guessing) that having it be too far into the cockpit would be a nuisance.   Easy enough to extend later on if necessary.

Gluing the last two parts together: 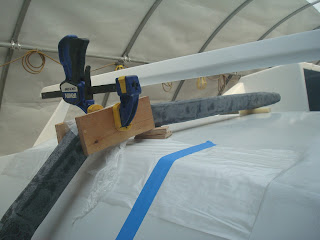 Getting ready to laminate the uni on all sides of the join: 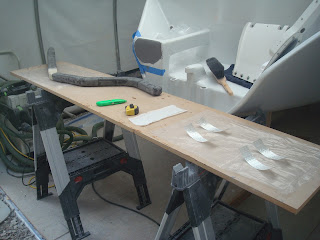 Getting ready to laminate the final carbon layers over the join: 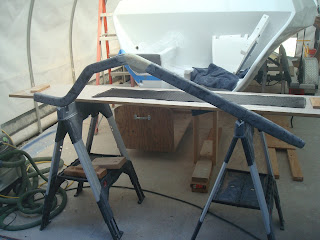 After wetting out the carbon, I just wrapped it around the tiller in a spiral pattern, then peel-plyed it, then wrapped it in plastic to help get any air bubbles out.   Probably thicker than it needs to be but I think that's okay.   In fact I am thrilled so far with how it's turning out - this thing is very strong and very light.   Tiller is being faired at the moment, more later.
Posted by Jay at 9:30 PM No comments:

Some time back Ian offered a limited number of 10mm aluminum wingnet eyes for sale, and I picked up a batch.   After painting the beams it was time to fit the wingnet eyes, first by drilling pilot holes, then the final hole, then tapping, then mounting the eye in an epoxy sealant.    There are approximately 36 eyes to be mounted.

I mentioned in an earlier post that I was learning about tapping - it's not something I've done before.   Here are the first two tapped holes of my life: 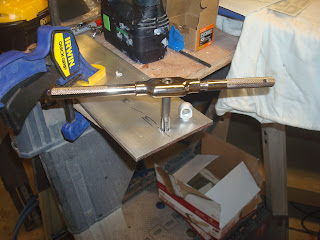 Pretty awesome feeling, threading something into that that first hole :).

Here I'm trying to do it for real: 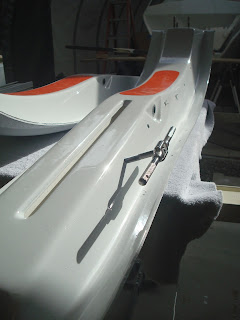 I have been encountering major problems with the backing plates falling off after I remove the tap.   The force required to turn the tap seems to be torqueing the plates more than the 5200 adhesive (used to fix the plates to the inner beam wall, according to Ian) can withstand.     I discovered that I was using a slightly too small tap drill (8.33mm) which seems to have been the primary cause (plans say to use 8.6mm, duh on me).   I used this drill partly because there wasn't any metric drills in my tap-and-die set, and I didn't take the time to figure out what some of the other sizes were for.   Well after doing more research, I figured out that an 'R' drill (.3390" or 8.611mm) was the closest my tap-and-die set could offer to the specified 8.6mm.   Weird - I never knew there was such things as letter-rated drill sizes.

However even after going to the R' drill size, I have still had a couple of plates fall off inside of the beam.  Very frustrating - at some point I am going to have to play a fishing game to see if I cannot recover the plates and get them lined up.

At one point I tried drilling two small temporary holes to either side of the main hole, just as a means of keeping it in place while I did the main tap: 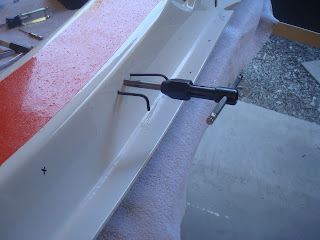 It worked but was awkward.

I'll update later on the status of my plate fishing expeditions - I have about 8 or 9 plates to recover :-(.   Not looking forward to that - but I'd rather try than deal with them rattling around.

Beams were all primed and sanded, then ready for paint: 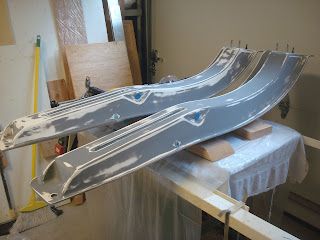 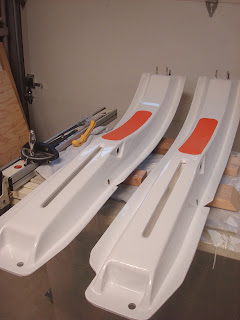 Getting ready to paint the beam tops: 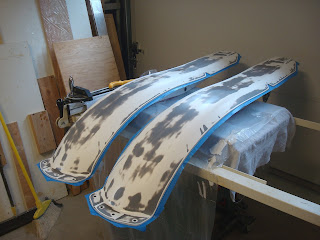 Masking off for non-skid: 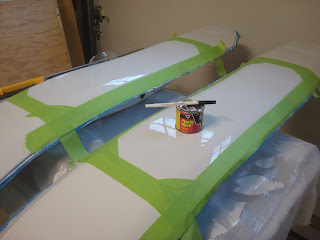 The can of wood putty you see has been serving as my standard corner-radius template for all non-skid area work.   I didn't think it was necessary to non-skid the entire top of the beam, just the area you see. 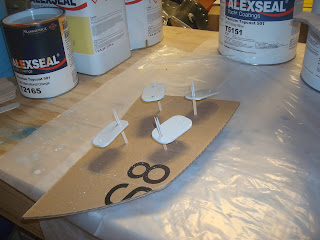 Had a few runs here and there, but all in all the beam paint job(s) turned out reasonable decent.
Posted by Jay at 8:00 PM No comments:

Yay, boat is now on the trailer for good: 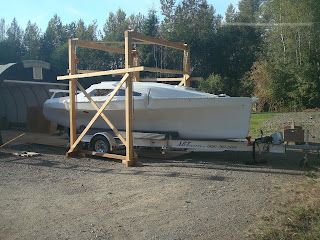 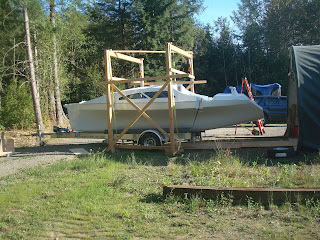 My son-in-law Erik helped me again, this time things went very smooth and I think we had it dropped on the trailer in about 15 minutes or so.     Got the side-bunks (roughly) adjusted and then moved the trailer back in the tent.    Tent is not long enough anymore, the trailer tongue sticks out slightly so I can't fully close the front tent flap.   Guess I need to figure out long-term storage (fallback is to just leave the poor thing outside all of the time... :).    There are lots of little things left to do on the trailer: mount tie-down points, re-locate and mount winch-platform, etc.    Still, I am getting closer now to starting beam attachment work!

Tiller is a work-in-progress: 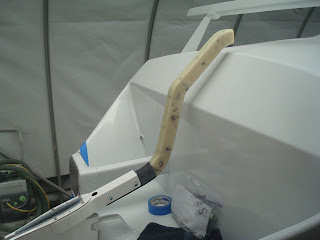 The tiller has three layers of glass uni on top and bottom, and one layer of glass uni on the sides, all (going to be) covered with carbon fiber.   I had thought I'd have plenty of slop on the portion that fits inside the tiller bracket, but it is already a tight squeeze fit - guess I shouldn't spend much time painting that part.   Good news is that the incomplete section above feels very light-weight as I hold it.   I also spent some time today gluing together a blank for the next section (mostly will be a straight piece).

My Farrier-supplied rudder case has one small problem:   the hole in the tiller bracket blocks removal of the rudder pin from above.  No big deal, I plan to elongate the hole until it does work.  Just surprised that a factory-supplied part wasn't 100% perfect.

I finally - after about six or seven years - took the beams out of their shipping crate.   The packing tape had gotten very hard in multiple places on each beam, so I had to use De-Solv-It to (slowly) get it all off.  After that, each beam got a nice soapy wash... 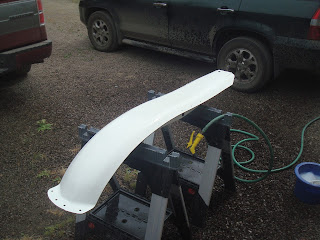 ...followed by a degreaser treatment.  I tried to be diligent during the cleaning process - don't want any adhesion issues due to the gelcoat or missed wax areas.   After that I sanded all four beams down to 150 grit (felt almost criminal having to ruin that nice gelcoat finish) and applied primer.  This is the first coat (looks blotchy because I'm brushing it on, second coat always looks more even): 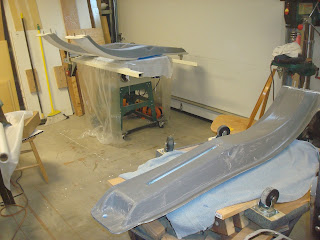 I've never done any thread tapping before, so I spent time reading up on that process and have also ordered myself a combined SAE\metric tap and die set.   Will need this for mounting the wingnet support eyes in the sides of the beams.

I mounted the bow bulkhead cover: 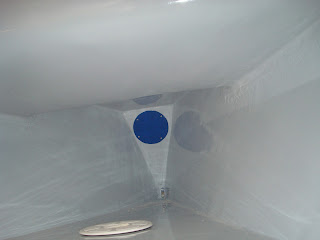 I am to going to get neoprene or similar foam-based compressible tape, to put under the flange of that cover to make it weather-tight.

The rudder compartment covers also got installed; I won't weather-strip these of course: 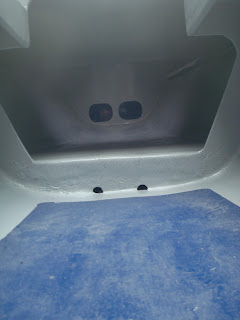 I made over-sized, epoxy-filled screw holes for each of these compartment covers.  It's not a make-or-break issue but I just wanted to try to do it right.   You can see in the foreground above my big blue anti-skid section on the deck of the boat.  Yeah it's kinda dirty right now.

Here is an inside shot of the windows and the storage compartment covers... 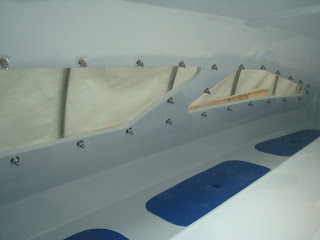 I have not been happy with the sealing qualities of the screw-in style deck plates that I installed in my floats.   By end of the rainy season, there was usually 2-3" of water sitting on the bottom of each float section (which of course I would vacuum out, but that's not the point).   So when I heard about the Armstrong deck plates which use an entirely different principle to seal the hole, I decided to switch over.

The new deck plates require a 6 3/4" cutout, the old ones were 6 1/2".   So after removing all of the old ones (eight little screws per each, glad to be done with those), I then had to jigsaw an extra 1/8" in radius around each hole.   Mostly I just free-handed this job: 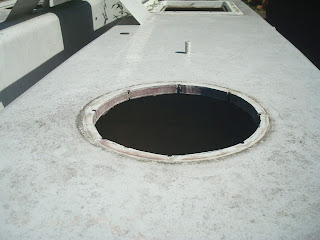 Then I cleaned off the dirt and remaining silicon (ugh, don't think I will ever use silicon again).   Looked cool - I could see eight(8)-year old paint shining through :). 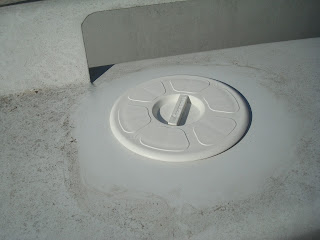 As a final step, I then installed all six new plates (in less than five minutes, these things are great): 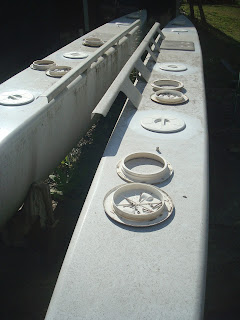 Look at all of the old deck plate hardware that now can get stuffed into the garage somewhere.

Truth be told, I think the leakage had as much to do with installer (me) errors rather than the design of the old deck plates.   From what I could tell, not using sufficient silicon and/or not applying it in all the right places, were probably the biggest issues.  It will be interesting to see how the new deck plates perform while sitting outside in a Pacific NW rainy season, and also interesting to see if the rectangular center hatches were a leak source or not.    The new deck plates are also going in the main hull, for the forward bow compartment and for the inside & outside capsize compartment holes.

Trailer update:  I got sick of continual pondering on how to make the bunk carpet lie flat (it kept bubbling up) on the bunk, and how to attach it securely.   Decide to brute-force it by gluing it down with contact cement on top, and aluminum bars screwed into the sides and bottom (on the ends) of the bunk: 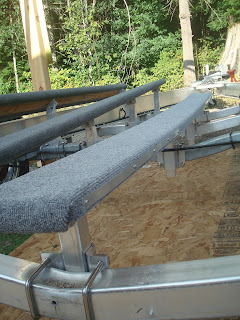 The contact cement is supposed to be water-resistant, and I filled each screw hole with epoxy before screwing everything down for the last time.   Worst that can happen is that some far off future day I will end up attacking the carpet with a grinder to get it off.     I will hate myself at that point, but for now am just glad it's done.

Anyway, getting closer to putting the boat on the trailer for good. 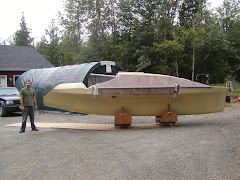